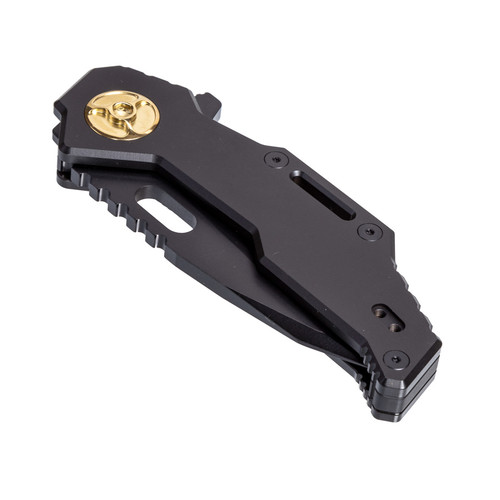 A mid-sized tanto with a gunner style grip. The knife blade rotates shy of 180 degrees, allowing for a more pistol grip-like feel. A finger guard moonlights as a flipper device when the knife is closed and the use of the ORB® pivot system and tri-spoke pivot assembly make this knife nearly effortless to open. The large jimping on the blade spine act as a thumb rest and where the blade meets the frame, the jimps are continued and widened to increase confidence in your grip during heavy use. The rear of the handle is slightly elongated to allow the knife to extend slightly past your palm help with stability. We've added ambidextrous thumb-studs which have been individually machined for extra traction. You'll find two thumb studs on each side of this knife. This is symbolic of its length and adds a touch of character where needed.