Greeley, PA - Thompson Auto-Ordnance, maker of the famous "Tommy Gun" and other classic firearms throughout history, is proud to introduce the Limited Edition D-Day Series.

The D-Day Series consists of three limited edition, commemorative firearms: The Soldier M1 Carbine, The Ranger Thompson, and The General 1911. On June 6, 1944, on the beaches of Normandy, the greatest Allied undertaking of World War II took place. America’s brave warriors were called to do the impossible, beginning the struggle to wrest Europe from the hands of Nazi tyranny. Auto-Ordnance offers this series to honor the many American soldiers who fought so others could be free again. The firearms in this series are a limited quantity, special edition. They are available for order now through your local firearms dealer.

Auto-Ordnance offers “The Soldier M1 Carbine,” commemorating the soldiers who landed by sea and air in France on that fateful day, 75 years ago. On the left side are engraved newspaper headlines announcing that the invasion had begun, followed by part of General Eisenhower’s famous address to his gathered forces. The buttstock features images depicting the beach landings. On the right side are engraved patches of the United States Army divisions involved, and paratroopers in their drop gear. The map of the landings is shown in part, and commemorative dog-tags for Operation Overlord. Each D-Day M1 Carbine is made entirely in the United States, and finished in super durable Cerakote Patriot Brown. Each is chambered in .30 Carbine, with an 18” barrel, American Walnut stocks, flip rear sight, and comes with a 15 round magazine. The Soldier M1 Carbine (AOM130C2) has an MSRP of $1391. 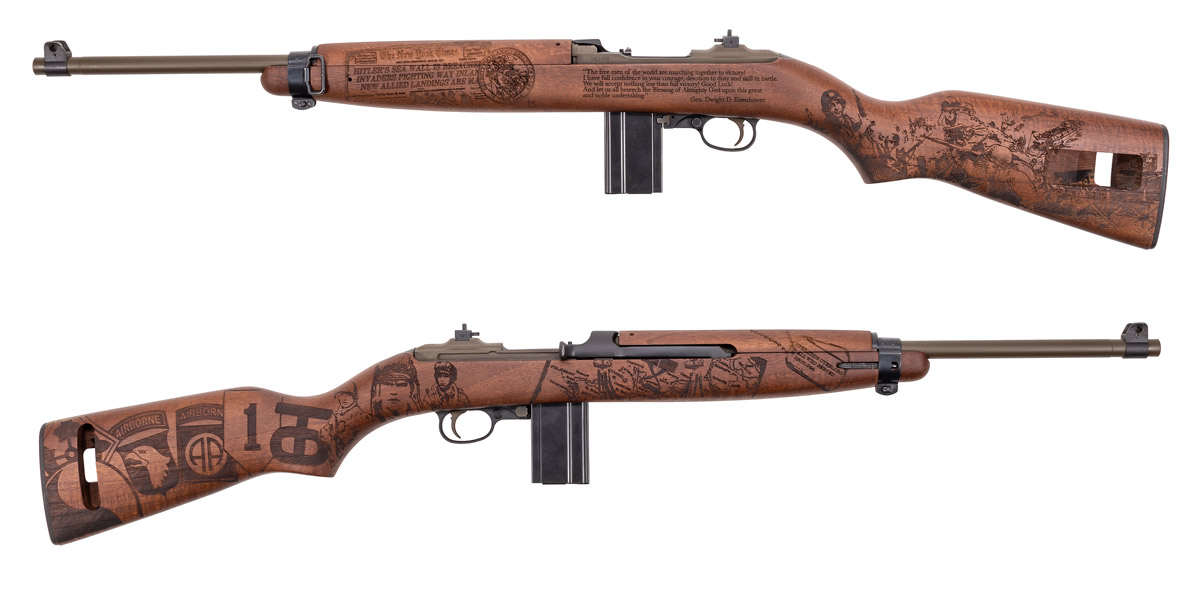 On D-Day, the U.S. Army Rangers faced an impossible mission to seize German fortifications at Pointe du Hoc and destroy the enemy positions. Auto-Ordnance honors the memory of the “Boys of Pointe du Hoc” with “The Ranger Thompson.” Each gun features engravings commemorating the Ranger’s role in D-Day. On the right buttstock is engraved part of President Ronald Reagan’s famous speech on the 40th anniversary of the landing, along with an image of an Army Ranger, the Ranger patch, and grappling hook used to scale the cliffs. The date of the battle is on the right forearm. On the left side handguard is engraved Maj. General Cota’s quote forever associated with D-Day, “Rangers Lead the Way!” Images of Rangers in action, the Medal of Honor, and their leader Lt. Col. James Earl Rudder adorn the buttstock. Each side of the grip has a 75th Anniversary D-Day commemorative emblem. The finish is super durable Cerakote in Olive Drab, with Patriot Brown controls, and Armor Black fill on the engraving. Each gun starts as a factory Thompson M1 Model, chambered in .45 ACP, with 16.5” barrel, fixed battle sights, and high quality American walnut furniture. One 30-round and one 20-round magazine, a Kerr sling, and a WWII 3 mag pouch are included. The Ranger Thompson (TM1C2) has an MSRP of $1886. 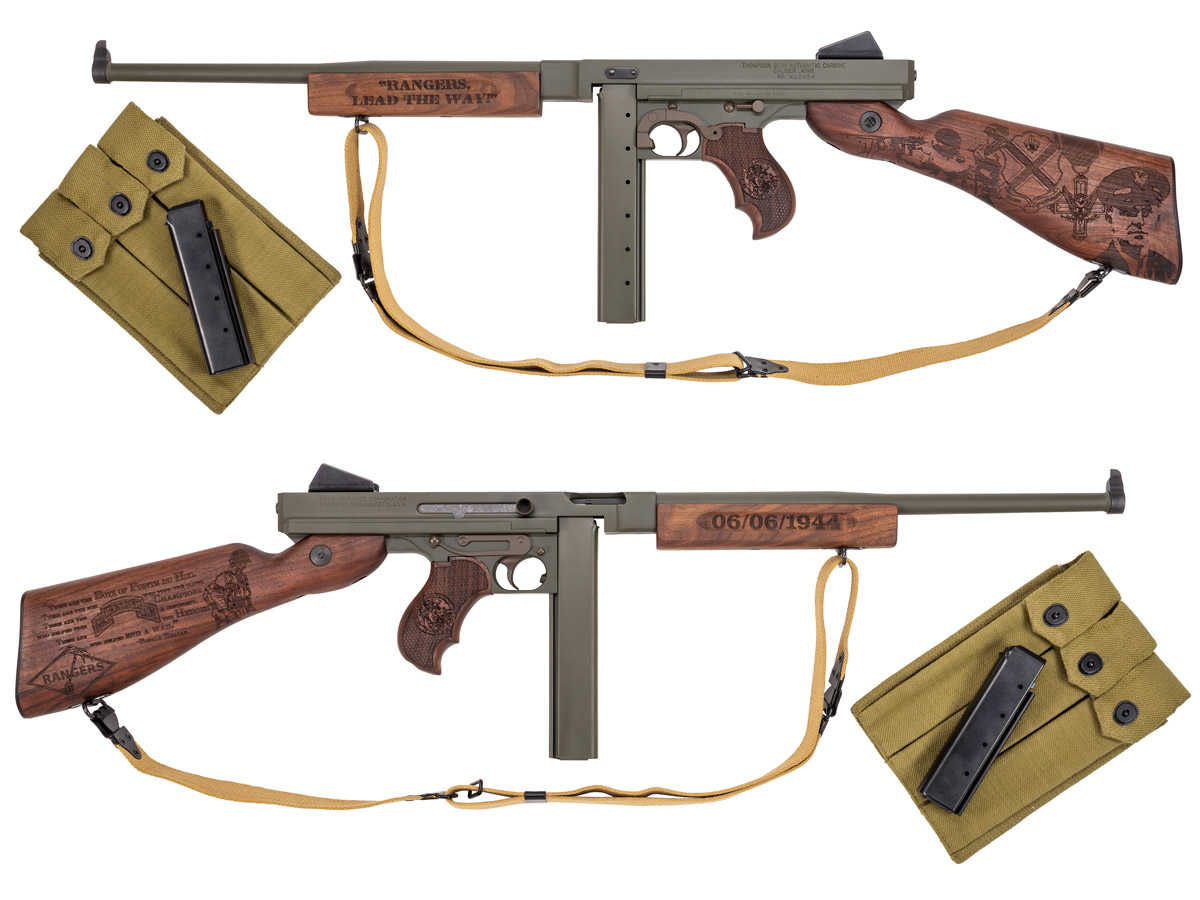 To honor the great men who led American forces on D-Day, Auto-Ordnance introduces the “The General 1911” commemorative D-Day 75th Anniversary pistol. Engraved on the left side of the pistol is the iconic image of General Dwight D. Eisenhower, speaking to his men prior to the start of Operation Overlord. His insightful words, “Only our individual faith in freedom can keep us free” are engraved on the slide. The right side features the image of General Omar Bradley, Admiral Alan Kirk, a battle worn American Flag, and D-Day 75th Anniversary commemorative emblem. An Army eagle badge is engraved on both side of the grips. The finish is super durable Cerakote in Patriot Brown, with Olive Drab controls, and Armor Black engraving. This gun starts as a GI Model 1911, made entirely in the United States. It features a 5” barrel, GI sights, and is chambered in .45 ACP. One seven round magazine is included. The General 1911 (1911BKOWC4) has an MSRP of $1134.

All three guns in the D-Day Series will be displayed at the Kahr Firearms Group booth #6063 at NRAAM in Indianapolis, IN, on April 26-28. Attendees can see the guns first hand during exhibit hours.